Labrador Retriever coat colors are black, chocolate and yellow as recognized within ALL written breed standards including AKC and FCI. 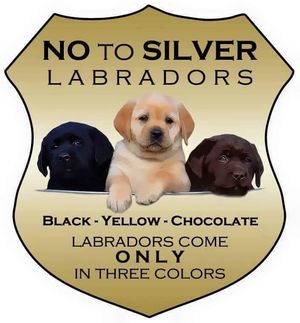 This article is not going to go into the depth of canine coat color genetics, but rather keep things simple and within reason for most people. At the end of this article, I will add links to some sites that will be helpful for those interested in the genetics of coat colors.

I want to start with our basic Labrador colors and their variations.  Later we will discuss the so-called Silver and White Labradors and also talk about mismarking or unusual colors that can happen in the Lab.

BLACK: The basic color.  Black Labradors are solid black. A small white spot on the chest is permissible.  Sparse white hairs in between the toes and footpads are common in some of the blacks.  Some mature black Labradors will have a red or orange hue to their coats at certain times of the year.  This is known as casting.  Casting can occur when the Lab is shedding and the hair is dead but also can be a result of bleaching from prolonged exposure to the sun.

Yellow Labradors that lack black pigment all together will have brownish or pinkish colored eye rims, foot-pads, nose and lips and they will never turn black.  Dudley Labradors is a direct result from the yellow Labrador inheriting two sets of chocolate genes we refer to as "bb". So technically speaking, you can look at this as a "chocolate dog in a yellow coat" or an "eebb". Unfortunately Dudley Labradors are disqualified from being shown and was excepted until the revised AKC standard in 1994. The FCI or "world" standard does not disqualify for lack of pigment.  One more note..the United Kennel Club also disqualifies for lack of pigment. What a shame!!     Nevertheless, this does not make any Dudley Labrador inferior. They are Labradors true and true.  This does not mean that I think it is okay to breed a Dudley Labrador, rather saying that they are normal in every way with the exception of having the pigment of a chocolate.  If you choose to breed your Dudley Labrador, then do so back to a quality black Labrador.   Breeding a chocolate Labrador to a yellow Labrador can produce either black, chocolate and/or yellow Labradors and the yellow offspring may or may not have "Dudley" pigment. All this would depend on "if" the sire and dam carry the hidden recessives for chocolate or yellow and/or the gene for black. Sounds confusing but it really isn't.  To help simplify this, I have copied and pasted a paragraph courtesy of the Vet DNA Center that gives you some idea of how many color combinations can be seen within the breed.

MISMARKINGS: White seems to be the biggest bugaboo and most shunned marking in the Labrador breed.  A small white spot, stripe or patch on the chest is very common and does not lessen the quality of a Labrador, nor indicate it is not pure bred.  Sparse white hairs can appear on the tips of toes, between the footpads, on the heels, near the groin, and under the neck.  However, if white spots are large and white markings are highly noticeable, then this is not typical and could indicate the dog may be mixed with another breed.  Scarring can also result in white hairs on a Labrador.
Splashing is described as a black Labrador with tan or yellowish hairs on the legs and sometimes neck and chest.  This mis-marking looks as if the black lab ran through a mud puddle and was splashed with muddy water, hence the name Splashing.  This is a mis-marking that had been noted in the breed for many generations.  It is not wise to breed any Labrador that is splashed, as this will only perpetuate the gene for years to come.  It does not affect the dogs ability to be an excellent pet or hunting companion.
Black & Tan:  Like the splashing, black and tan has been recorded early on in Labrador history. The black and tan is a serious fault and under no circumstance should this color be perpetuated.

Mosaic:  Some people have asked me if a Labrador can be TWO colors such as black and yellow.  Mosaic is a very rare condition in which results in improper cell division that effects the color of the dog. Such dogs can be yellow with small or large black patches.  I have only produced one Mosaic to date.  Again, this is very rare and seldom happens. A great example of a Mosaic Labrador can be seen by clicking (here)

WHITE:  It never fails, several times a week I get phone calls and e-mails for white Labs.  I tell people without trying to sound rude, that there is no such thing as a pure white Labrador.  The color yellow is the correct term, but when people see a Labrador that is of the very light cream shade, they instinctively say, White.  I have produced many Labrador pups that could be classified as white when pups but they always mature to have the tale-tale signs of shading of some from or another, either on the ears, back, etc. The shading is very pale and almost unnoticeable and pigment as black as coal but I am sorry to say, it is still classified as yellow and not white.  The gene that produces pure white such as seen in the Maltese, white German shepherds, white boxers and other breeds does not exist in the Labrador.  I do understand how people can easily use the term white lab when they see a pale yellow but white is not a term to be truly associated with the Labrador breed.  Most of the "White Labs" being advertised from backyard breeders are lacking in suitable temperaments, proper size and seem to have more health issues.  Thus said, breeding for a "specific color" will not allow you to advance in any other area.  My best advice, stay away from persons advertising "White Labradors". It is nothing more than a sales pitch and is something frowned upon amongst reputable breeders, and other fanciers in the Labrador community.

SILVER, CHARCOAL and CHAMPAGNE LABS: AKA "Dilute Labrador Colors" I am sorry but despite some people's misguided attempts in making the general public believe that there is a  "dilute gene" in purebred Labradors is completely absurd!   There absolutely no such thing as a pure bred silver, charcoal or champagne Labrador.  These are dogs that early in the 60's and 70's, two kennels that bred both Labradors and Weimaraners began advertising Silver Labradors. The dilute gene is normal in the Weimaraner breed. It does not occur naturally in the Labrador. Only a dog that genetic background consist of Labrador/Weimaraner crossbreeding can produce such colors. Those professing to breed and advertise dilute Labradors are misrepresenting the color of the dog on the AKC papers.  The American Kennel club, United Kennel Club and FCI "WORLD breed standard does not recognize ANY of these dilute colors. The parent club (The Labrador Retriever Club, Inc) does NOT support these colors!
DO NOT FALL FOR SUCH A SCAM!   To read more about so-called silver/dilute Labrador history please click on the banner below: 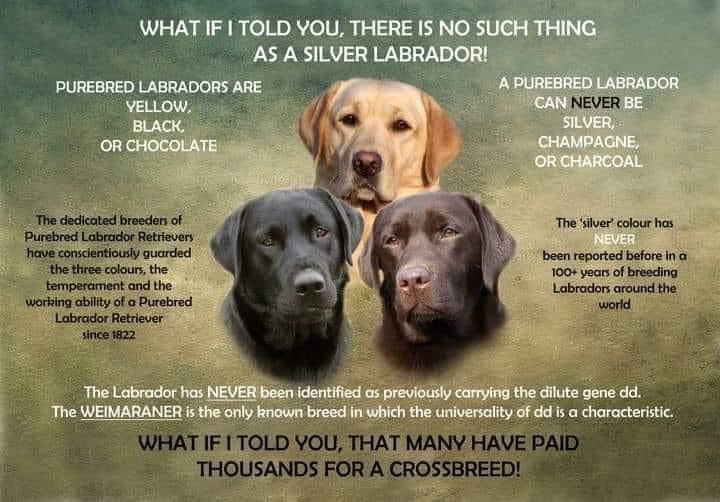 For anyone interested in Labrador coat color genetics, I have added a link that will offer more detailed explanations.